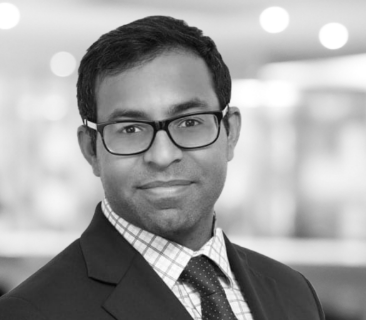 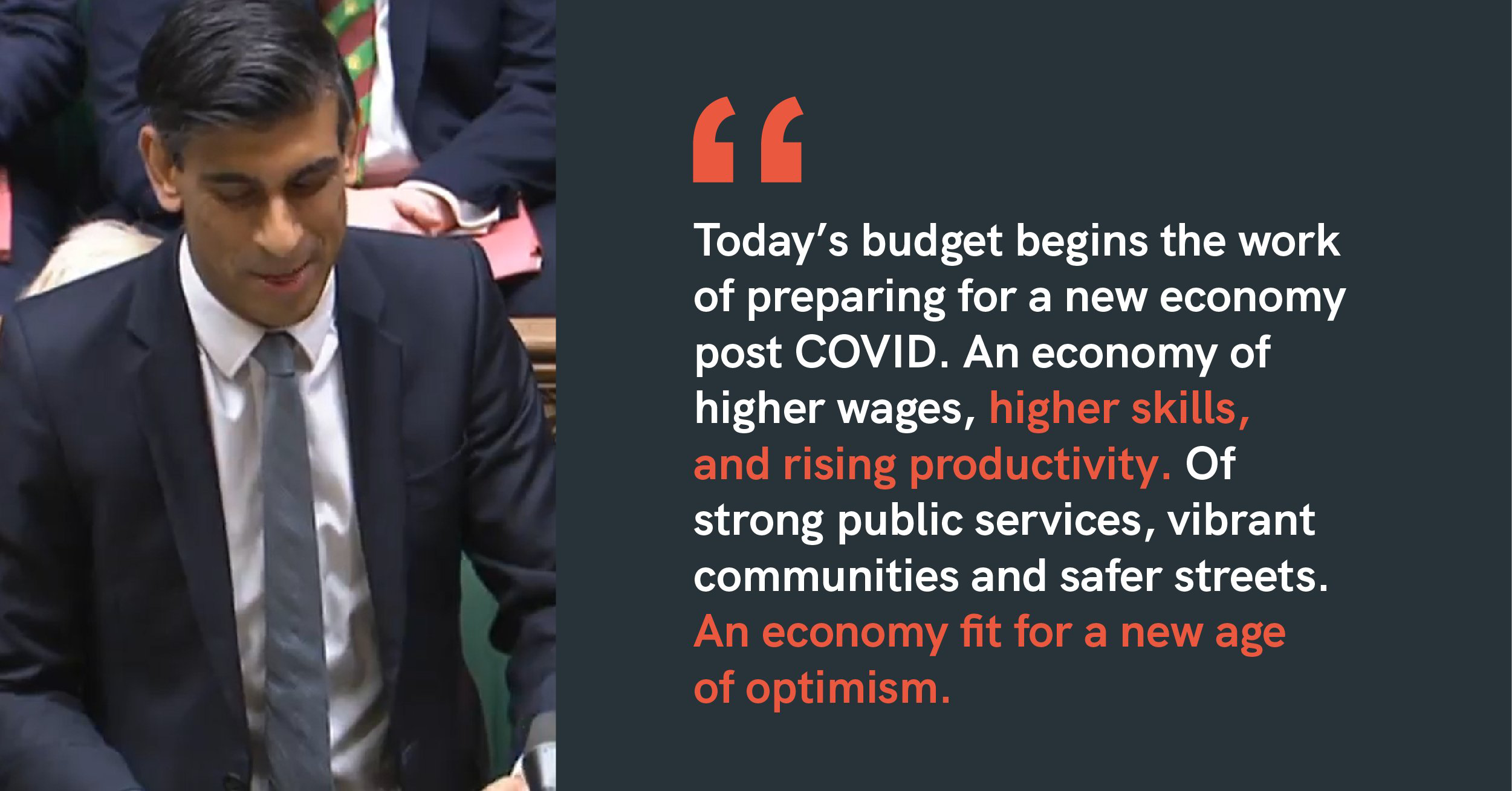 Budget Day is always a rollercoaster in the world of public affairs, but today’s felt a little calmer, because much of it had already been announced. This struck wrath amongst some parliamentarians, with Deputy Speaker Dame Eleanor Laing telling the Chancellor that he should have saved it for MPs first and that she looked forward to hearing the remainder of his announcements.

Unlike the Spring Budget, which struck a sombre tone, this year’s was far more optimistic. It was a Budget for a post-Covid economy, a Budget which the Chancellor declared fit for a new age of optimism, a Budget which had the Government’s Levelling Up mission weaved throughout.

Rishi Sunak gave an assured speech, which strove to calm nerves about cost-of-living issues and included a raft of cuts and relief on Air Passenger Duty, continued frozen fuel duty, alcohol and on business rates.

The issue of low pay was also addressed with an acceptance of the Low Pay Commission recommendation to increase the National Living Wage from £8.91 to £9.50 an hour and the Chancellor concluded his Statement by announcing a reduction in the taper rate in University Credit from 63p to 55p.

For Rachel Reeves, it was a jump in the deep end. Just moments before the Chancellor rose to his feet, it was revealed that Labour leader, Sir Keir Starmer had received a positive Covid test result, meaning the traditional rebuttal speech had to be delivered by the relatively new Shadow Chancellor.

She said some families and businesses will not recognise the UK described by the Chancellor and that the Universal Credit reduction will not make up for the cut earlier this month.

Our top 5 takeaways from today’s Budget:

Despite increased inflation, the Chancellor struck a positive tone explaining that the Office for Budget Responsibility had forecast a faster bounce back, with growth expected to be 6.5% rather than the 4% previously expected. He said “Employment is up. Inflation is growing. Public services are improving. The public finances are stabilising. And wages are rising.”

It was this brighter picture that allowed the Chancellor to make more promises to the British people and increase departmental spending over the course of this Parliament by £150 billion.

It also enabled him to make another surprise announcement: the return of overseas aid spending to 0.7% from 0.5% by 2024-25, reversing a broken manifesto pledge.

Our teetotal Chancellor dedicated quite a lot of his speech to booze, with an overhaul of the Alcohol Duty system. He said the status quo was “outdated, complex and full of historical anomalies” and announced that the new system will be designed around a common sense principle – the stronger the drink, the higher the rate.

The number of main duty rates will be cut from 15 to 6, and the 28% duty premium on sparkling wines and duty on fruit ciders will be cut. This represents a tax cut worth £3 billion. As the Chancellor said, sparkling wine is no longer the preserve of the wealthy elite.

Draught beer and community pubs were winners too, with a cut by 5% and the Chancellor also announced proposals for a new “small producer relief” to include cidermakers and other producers making drinks of less than 8.5% alcohol by volume.

3. Some business fears alleviated but was the Budget a missed opportunity?

Businesses have been particularly nervous about business rates with ramped up lobbying from groups like the CBI and British Retail Consortium (BRC).

Retail, hospitality and leisure firms breathed a sigh of relief when the Chancellor announced a temporary 50% cut in their business rates, up to a maximum of £110000.

As part of the wider review of business rates, Mr Sunak also confirmed businesses would get more frequent revaluations, beginning every three years and that from 2023, all firms would be able to make improvements to their property without having to pay extra business rates for 12 months.

But the announcement wasn’t welcomed by everyone in the business community with the BRC saying it doesn’t go far enough, is a missed opportunity for retail and prevents it from maximising its contribution to the levelling up agenda. The CBI accepted that the Chancellor had shown a genuine willingness to listen to business, but that they had missed an opportunity to truly reform the system.

The oddest and most surprising announcement was the Chancellor’s decision to cut Air Passenger Duty (APD) by 50% on domestic flights in a bid to boost regional connectivity just days before COP26. A move that was branded a “disgrace” by the SNP Westminster leader, Ian Blackford.

At the same time, the Chancellor announced a new ultra-long-haul distance band, increasing the rate to £91 for economy passengers flying more than 5,5000 miles, a move the Board of Airline Representatives in the UK said was “political posturing that undermines the industry’s net-zero commitments”.

The travel industry has also hit out that no money raised from APD to date has not gone towards sustainability. American Express Global Business Travel said this needs to be rectified, with APD ringfenced for sustainable initiatives such as the development of sustainable aviation fuel.

5. A helping hand with cost of living

Cost of living was a theme throughout the Chancellor’s statement, and Mr Sunak promised to help struggling and worried families as demonstrated through the increase in National Living Wage, reduction in Universal Credit taper, freeze in fuel duty and freeze in public sector pay.

Lower paid workers and families also stand to benefit from the £200 million invested in the Supporting Families Programme, with £2 billion more for schools.

Labour are clear the plans don’t go far enough, with Rachel Reeves suggesting the Chancellor should have cut VAT on gas and electricity bills to 0% for the next six month and the Resolution Foundation say households would end up paying more.

Let’s raise a glass to the fact that today’s Budget and Spending Review was far more positive than what would have been anticipated a few months ago.

Most glaringly was the lack of attention to green issues, particularly with COP26 beginning this weekend. The Chancellor did mention the Net Zero Strategy, but there was nothing of note to showcase the UK as a world leader when it comes to climate change.

The Spring Budget was viewed as a placeholder for what was to come – and as expected this Autumn’s focused more on the Government’s vision and ambition for the rest of this Parliament and beyond.

Clear that his plan is working, the Chancellor made a promise to the British people that he would deliver a post-pandemic economy that is strong, growing and recovering faster than our competitors. He was clear that whilst spending levels have increased, he ultimately wants to see a return to low taxes within the context of a flourish economy, a core principle of conservative values and one that will likely get the party over the line in the next election.

And whilst this Budget may not have gone far enough to calm cost of living concerns and alleviate business fears, with anxiety about it being a high-tax, big spend Budget, the Chancellor’s speech seems to have gone down well with the parliamentary party, who will be able to take a more optimistic plan (albeit one that isn’t traditionally conservative) backed up by spending commitments to their constituencies.

If you would like to discuss any of the issues outlined in the Budget and Spending Review in further detail, then please do not hesitate to get in touch with Samir Dwesar.